We Are A Community

Save The Cowboy, stop American Prairie Reserve is a grassroots movement of a community coming together to protect multiple use on public lands. The aim is to educate and increase awareness of the plans that the American Prairie Reserve is attemping to implement. We are farmers, ranchers, business owners and families that stand up for our livelihood and for the livelihood of future generations. The Save The Cowboy movement encourages community support and action instead of acceptance.

Why We Are Taking A Stance

The American Prairie Reserve's plan is to control 3.5 million acres of public and private land in north central and central Montana; their single, dominant goal being to create the largest wildlife reserve in North America. APR's ultimate plan is to gain control of the 3.5 million acres and be beholden to only a few elites at the top of their board of directors, the major donors. To accomplish this goal , they must remove the productive agricultural structure from their target area, as well as limit hunting and recreation by the general public.

We reject the notion that cattle industry and agricultural jobs in general are low paying and antiquated. We reject the idea that the people living in the area that the APR is targeting should just step aside and let the APR take over. The APR claim that they wish to make an "American Serengeti" in north central Montana in order to improve the area. It may come as a suprise to some, but there are thousands of Montanans who live in the communities the APR wants to displace. Anyone who spends any time in north central Montana will find close-knit, thriving communities, with great schools, hard-working people, and an enviable lifestyle. The people who live in APR's target zone live there by choice, and they do not want to be forced out. These people should not have to be replaced just because a handful of billionaires have designs to create some sort of theme park.

Our mission is to raise awareness about American Prairie Reserve’s radical plan to assume over 3 million acres of public land for their single, dominant goal of the largest wildlife reserve in North America. To accomplish this goal they must remove all production agriculture from their target area, as well as limit hunting and recreation by the general public. We are here to help educate the public about the reality of who is “saving” the prairie and who is exploiting it. This area is viewed as pristine today because of 100 years of agriculture caring for it, and over 80 years of cooperation between ranchers and the Bureau of Land Management to improve and protect it. It is managed for multiple use under stringent standards, and is recognized as a world class hunting, fishing, and hiking area while also providing forage for production livestock that helps feed our nation and beyond. All of this was accomplished long before American Prairie Reserve ever cast their eyes upon it.

The APR is an existential threat to communities all over north central Montana. The success of APR is contingent upon them eradicating hundreds of family farms and ranches. APR cannot acheive their stated goal of a 3.5 million acre wildlife reserve without that happening. APR has represented this area as virtually vacant. That is an obvious mistruth to anyone who has visited north central Montana. The econnomic repercussions of liquidating a significant part of Montana's agricutlure economy will send ripple effects throughout Montana's economy.

The APR is a 501 (c) 3 nonprofit corporation. They claim to have leased pasture out for 13,000 head of livestock in 2020, which is a significant amount of tax-free income, that also increases the tax burden for the rest of Montanans. If they were to obtain approval for bison grazing from the BLM, those 13,000 head of cattle will have to find grazing elsewhere.

Lane Nordlund speaks with Ross Butcher about how the report by the Montana Natural Resource Coalition addresses a request by the American Prairie Reserve to convert BLM grazing leases from traditional livestock production to indigenous animal or bison uses. MTNRC President and Fergus County Commission Ross Butcher shares more on what the grassroots report is about. 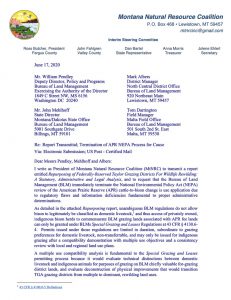 Download the Guide to Fight the 30 X 30 Land Grab 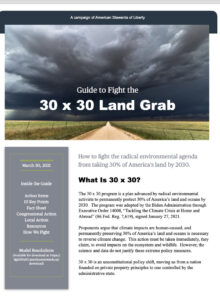